Home Blog Training How to recognise the signs of a stroke

Over 5000 miles from the UK on a remote island in the Pacific Ocean a group of 14 men and 14 women embarked on an extremely challenging adventure. As part of Channel 4’s 'The Island with Bear Grylls' the participants were abandoned on the treacherous island filled with terrifying beasts such as caiman crocodiles and deadly scorpions. As if this wasn’t bad enough, they had to fend for themselves for 6 weeks cut off from civilisation.

The Island was a gripping watch, with many scenes that left viewers questioning “will they make it to the end?” Doctor Belinda Fenty gives imperative her firsthand account of the constant struggle the women faced on the island to stay alive:

Taking part in ‘The Island with Bear Grylls’ was one of the best experiences of my life. Being immersed in nature with no contact with the outside world, no phone and no internet made me feel so acutely alive. Everything is simplified. Your priorities become water, food, fire, and shelter. I felt so peaceful and invigorated by the beauty of the nature surrounding me. It was also a massive challenge in many ways. We were abandoned on an island teeming with scorpions, spiders, snakes, death apples and many more threats. It was rainy season and the tropical humidity was oppressive. We had minimal resources and our survival training was very much a whistle-stop tour. On top of this, I felt a great deal of responsibility as the island doctor. I’ve described a few of the issues I had to deal with. It is by no means exhaustive but should give you a good idea of some of the health issues on the island.

Dehydration was one of the most crippling aspects of the experience. I’ve never been so dehydrated in my life! Some of the girls were hallucinating. It was hard for me to keep my eyes open and talking becomes such an effort. Your brain is so hypo-perfused that you feel you may pass out every time you move your head- especially on standing from sitting. I just focused on putting one foot in front of the other on those days we were lost in the jungle. Once water touches the ground, it is unsafe to drink unless it is filtered and boiled. I had to remind the girls of this when we found a waterfall at one of our most dehydrated moments. One sip and you can get nasty parasites some of which can cause seizures and affect the liver and the heart. 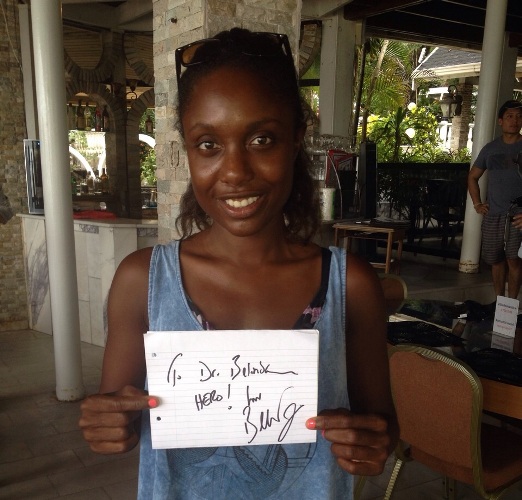 Interestingly dehydration suppresses hunger. This is just as well because if we had eaten whilst seriously dehydrated, it would have dehydrated us further in the effort to digest the food. I was worried about our kidneys going into acute renal failure, but I was able to keep an eye on blood pressures and heart rates. With the heat dilating our blood vessels and the reduced water intake, our blood pressures dropped in those difficult periods. We were producing virtually no urine. Although they must have taken a hit at the time, thankfully our kidneys have not suffered any long-term damage.

Another issue I had to deal with was immersion/trench foot. From the moment we swam to shore with two hours of daylight remaining until when we’d settled on home beach, our feet were more or less persistently damp. With the high humidity levels, nothing would dry in the jungle and we needed to keep our socks and boots on in order to trek. We were only allowed one pair of socks on the island so you can imagine how disgusting those socks became! Our feet became progressively more swollen, numb and painful and people lost toenails. It took months for me to regain the sensation in my big toes. We had to inspect our feet regularly throughout the trip to make sure we were not getting any nasty infections and that we didn’t have thorns from the jungle in them that we couldn’t feel due to the numbness. Being malnourished and in the tropical conditions, we were at high risk of infections which could quickly turn nasty.

Our diets were lacking in many vital nutrients and we lost 10-20% of our body weight. The mainstay of our diets was coconut, snails and limpets. So it was a bit like the Atkins diet! Thankfully one coconut on average has about 1400kcal – without them we would’ve lost a lot more weight! We had a careful set-out meal plan when we got off the island to avoid refeeding syndrome (a potentially life-threatening syndrome that people can get when they start eating after a period of starvation).

For the most part, we were very sensible and sheltered in the jungle, wore our hats, cooled down in the ocean and drank plenty of water to ward off sunstroke. In fact, I think the time when Julie and George K went fishing for hours on the rocks was the only time the team was affected by sunstroke. There were other problems I had to deal with like Lauren’s burn, diarrhoea, vomiting, nappy rash, insect bites and injuries. Towards the end of the experience, I witnessed one of the girls cutting her thumb with a machete and I was amazed by how quick my reflexes had become. Without even thinking, I grabbed the wound and applied pressure before the blood had even had a chance to spill. I think that sort of environment makes you instinctive in an animalistic way. You do what you have to do promote survival without thinking about it!

If you have been inspired by the programme and are planning on undertaking your own adventure make sure you’re prepared! You never know when a dangerous situation could arise resulting in injury, so stock up on your first aid kit supplies and venture over to our First Aid Tips page for step by step guides on how to deal with everything from sprains to burns and scalds.