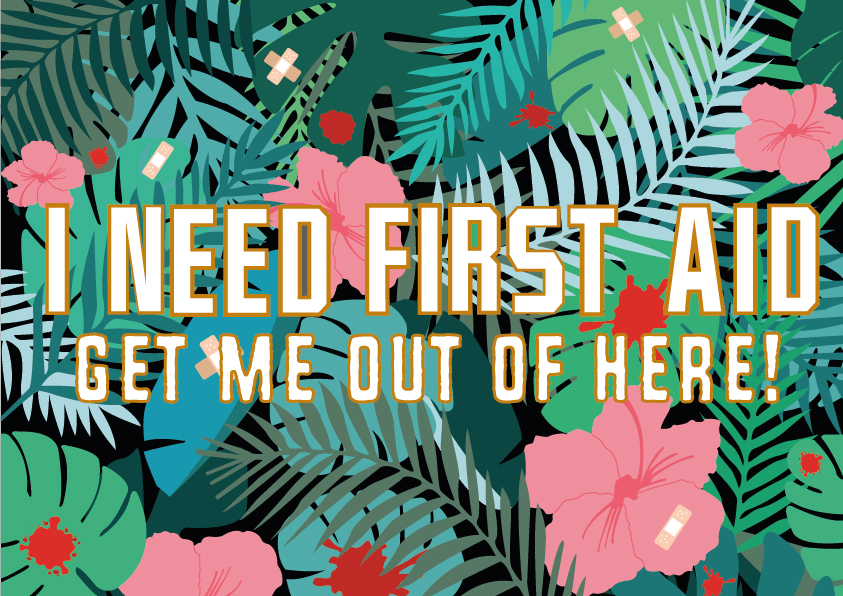 I need First Aid get me out of here!

Great TV Can pick us up during the cold and dark winter months. The return of I’m A Celebrity… Get Me Out Of Here this Sunday at 9pm has got us all looking forward to parachuting into the Australian jungle with this year’s campmates (all from the comfort of our own living room of course).

Some of us will have looked forward to this all year as for some reason, witnessing a group of celebrities tremble with fear as they are tormented with bugs, snakes and other critters as they complete bushtucker trials is guaranteed to brighten up our evenings.

What will this series hold for the contestants? We can’t wait to find out over the next few weeks as the new series of I’m a Celeb graces our television screens for a short period of time.

Although, as with any environment, there are a number of safety elements to consider. The jungle especially can be a particularly hazardous environment. We explore factors that the campmates should take into consideration and prepare for in our very own ‘Jungle Survival Guide’.

Rumble in the jungle

If the celebrities were to camp outside for three weeks in the UK, the likelihood of them getting hypothermia almost instantly would be very high. However, Australia experiences much higher temperatures than we do during this time of year as they’re heading into their Summer. Although, chilly nights may still be on the cards, so the campmates should ensure that they wrap up and wear extra layers overnight.

During the day, campmates are likely to be exposed to the sun. To protect themselves from the UV rays that are emitted by the sun, they should use a sun cream with a sun protection factor (SPF) of 30 or above.

Although harsh weather has been forecasted for the location of filming, Springbrook National Park campmates may need to find shelter as the show kicks off. Protection from the sun is still essential as the celebrities will spend the majority of their time outdoors with the exception of some who may take part in bushtucker trials that involve confined spaces.

Who will you be voting for to take part in the bushtucker trials? Hopefully there is a fair balance of celebrities who take part in the dreaded tasks this year to avoid another Gillian McKeith moment. We’re sure you will be able to recall when Gillian fainted live on air following her seventh trial nomination and was subsequently excluded from the task on medical grounds.

In the event of another celebrity fainting in a similar way to Gillian McKeith, who was given oxygen by Dr Bob who would hopefully be on hand to assist again, the victim should be encouraged to:

The celebs may experience bites or stings from some of the critters during their stay. There will be first aiders on hand to treat any emergencies that may occur within the camp. To relieve the pain, itching and swelling of a bite they should:

The sound of sleeping amongst creepy crawlies definitely does not sound appealing, however, watching a group of celebrities fight off various insects never gets old.

King or Queen of First Aid

With a basic diet of rice and beans in the jungle, celebrities must compete in bushtucker trials that can win them extra food for the camp as well, of course, the added luxuries that can be obtained from Kiosk Keith in exchange for Dingo Dollars.

Bushtucker trials are varied but the most anticipated one for us all is probably the trial that requires campmates to eat a gourmet selection of critter delights! Although we hope that food safety is still in practice, even if they are in the Australian jungle eating bugs. If a campmate were to experience food poisoning at any time, they should be encouraged to:

Whilst you may or may not find yourself in a jungle environment anytime soon, you can still apply this knowledge to other, everyday situations and become a King or Queen in First Aid.

Do you think you would survive in the jungle? We hope the campmates will take care in the jungle and have gone in prepared with some first aid knowledge and skills to equip them to deal with any incidents that may arise.

Will you be tuning in to I’m a Celebrity… Get Me Out of Here at the weekend? Let us know your thoughts as we anticipate who will be crowned King or Queen of the Jungle by tweeting us @imptraining.