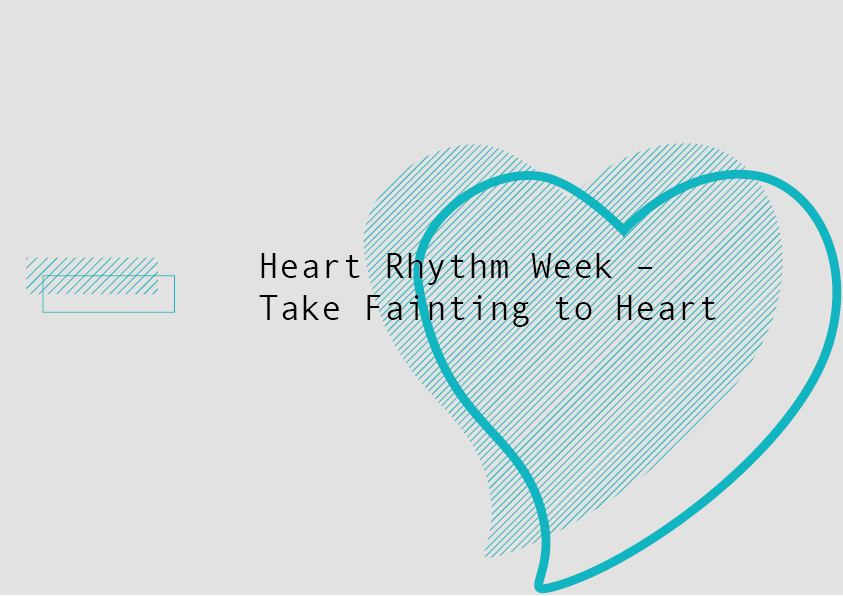 The first week of June marks the beginning of Heart Rhythm Week. During the week, the Arrhythmia Alliance have worked together to raise awareness about arrhythmias.

he AA’s core aims are to:

In line with this year’s focus, we take a look at how fainting is connected to the heart and what can be done for people who suffer from syncope.

The focus for Heart Rhythm Week this year has been 'Take Fainting to Heart'. Arrhythmias can affect people at any age and for some, fainting may be an early indication of a problem. There is no such thing as a simple faint, and whilst syncope (fainting) is relatively common, in some cases it can be a sign of an arrhythmia (heart rhythm disorder) and should not be ignored.

Syncope is caused by a problem in the regulation of blood pressure or by a problem with the heart, resulting in a sudden lack of blood supply to the brain.

Cardiac arrest is the number one killer in the western world and often syncope has been the only previous symptom.

There is a higher risk of cardiac syncope in people with the following:

Syncope is most commonly caused when a person’s blood pressure is too low which is known as hypotension. It is therefore important to know your numbers and the rhythm of your heart as this could detect an irregular beat and potential risk of arrhythmia.

Anyone that experiences symptoms such as fainting, dizziness, nausea or sweaty palms should be encouraged to sit or lie down where possible.

If you suffer from syncope, you should receive an initial evaluation from a medical professional which will determine the risk of arrhythmias. This will include measuring blood pressure and heart rate. An ECG (Electrocardiogram) should also be carried out to provide information about the cause of the syncope.

Let us know how you’ve been getting involved for Heart Rhythm Week by tweeting us @imptraining.

Keep a lookout for further facts and figures and be sure to share them and continue raising awareness throughout the year.